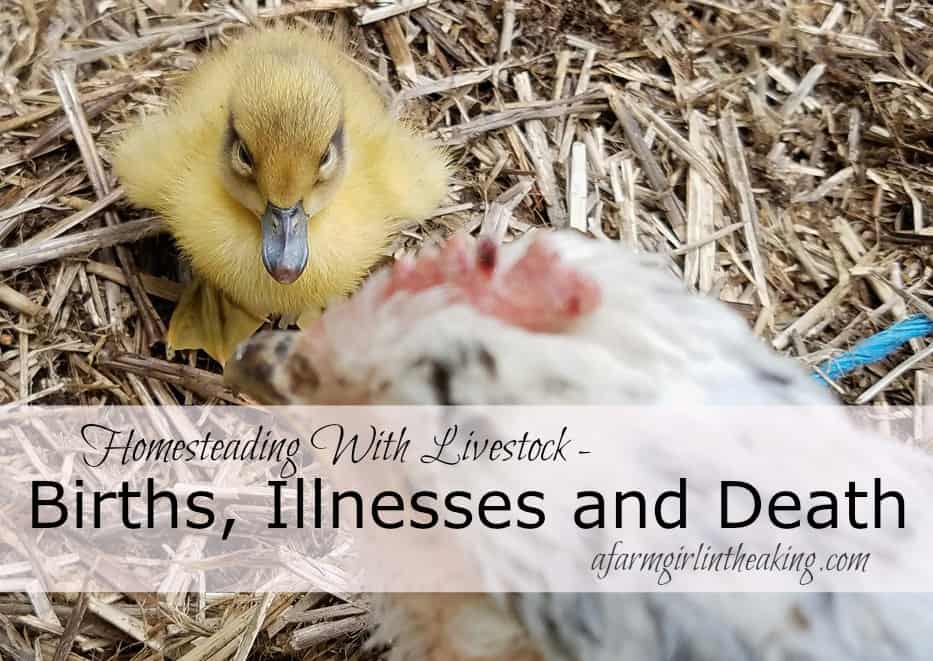 There’s gonna come a time when your homesteading journey will be tested, and sadly we recently hit that point.  Our homestead, and it’s people, were suffering and it truly had me wondering if this is the life I was prepared for.  The tears outweighed the smiles, my love for being with the livestock became a heavy burden and I became a robot moving along the property.  I can’t say it anymore honestly than this, those few weeks sucked.  Homesteading with livestock – births, illness, death, it’s not for the weak.  Hell, sometimes it’s not even for the strong.

Where do I even start?

We all know that with life comes death, we should be prepared for this.  But man, when it happens it wipes you out.  For someone like me, who cries on the drop of a dime watching a tv commercial, you can imagine the emotional wreck I can be.  Helping a sick livestock member is just as destructive to my emotional state as when we lose an animal.  And then there’s birth. Yes, there have been times that the waterworks overflowed at births as well.  What can I say, I am an emotional hormonal wreck!

When bad things happen it tends to happens all at once.  All. At. Once.  Seriously, this is no lie.  In the end I know it’s going to  make me stronger, I just can’t seem to see it yet; in time, with research and plenty of faith it always works itself out.

There’s a reason behind writing this blog.  I wanted to show you how quickly things can snowball on a homestead, because honestly, homesteading with livestock is one of the most unpredictable parts of homesteading.  Let me give you a replay of a few weeks in our life. 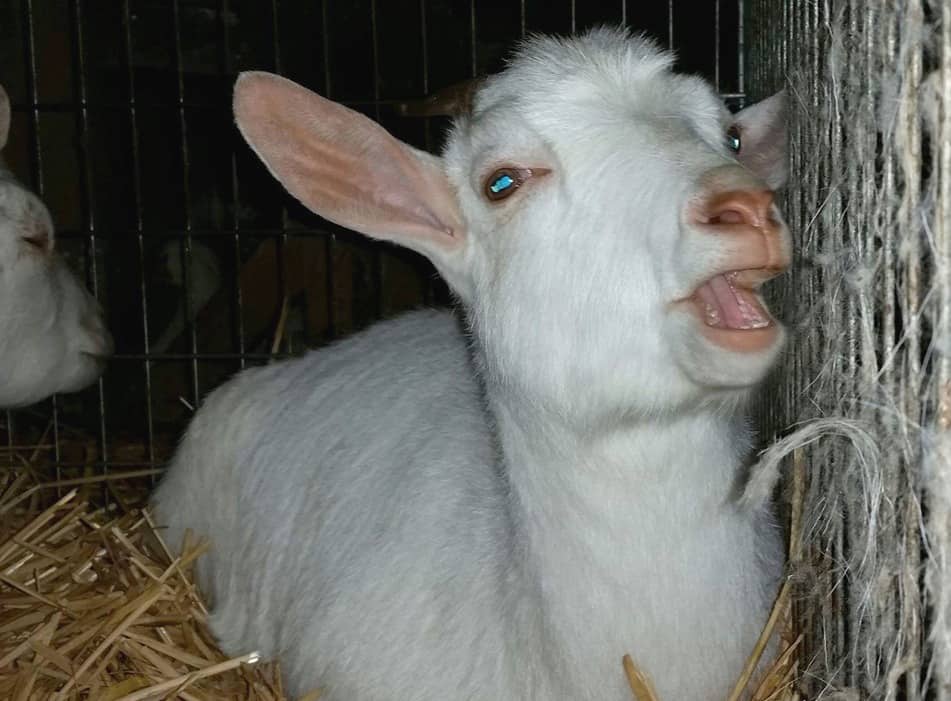 It started with the loss of Piper, our youngest doe.  She had been recovering from an injury and seemed to be doing well, until I noticed that she was barely eating and her waste was soft.  We sent her poop out for a fecal test, specifically asking that a Baerman fecal test be performed, and the results hit us hard, she was infested with lungworms.  There it was, the first punch to the gut.

She had at some point consumed a slug, snail or ate some contaminated vegetation left by an infected carrier.  One in a million chance of becoming infected and she drew the card.

Lungworms tend to occur more in wet damp climates, and how much wetter could it be for us?  Our homestead is located in the wettest part of country, we live under the canopy of a forest with underground springs running throughout the property.  The slugs here are the size of small dogs…I kid you not…and there is no possible way to eradicate them.

At this point nothing could be done, no antibiotic could help and I knew this was my fault.  Every bit of it, my fault.  She died in my arms shortly after the vet left, with her momma leaning against me as I cried, feeling as much pain as I did. 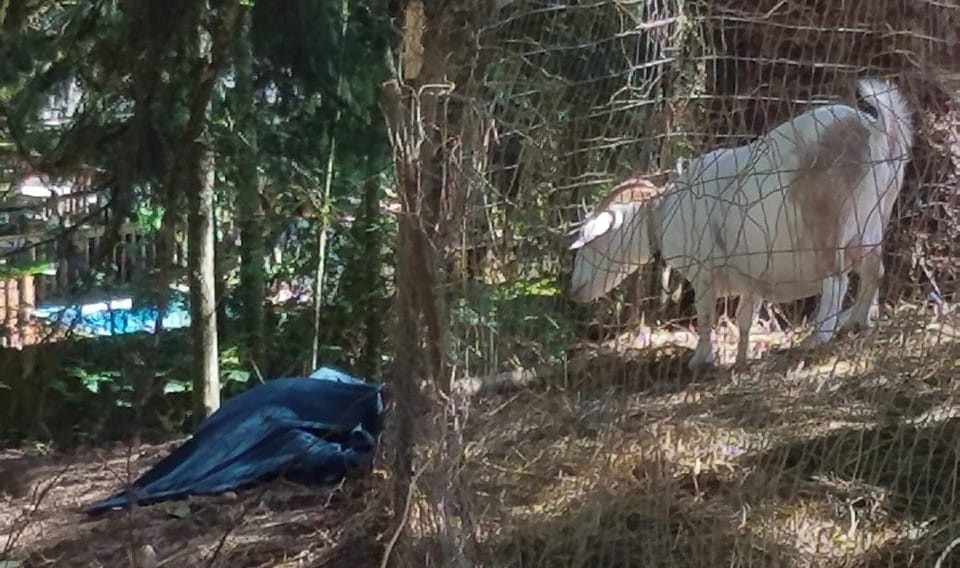 She was buried and the blanket she was covered in still covers her grave.  My guilt has not yet allowed me to remove it or move on from her death, hopefully one day soon I will be able to put it past me, one day.  When?  I have no idea.  Maybe when God allows me to forgive myself.

Shortly after Piper passed our first two rabbit litters were born on the property.  Though they’re meat rabbits they are still treated with love, handled daily, and many are given silly nicknames by our little ones.  No livestock should ever live without the touch and respect of the individual who cares for them.  Their birth came at a good time for us and this was exactly what was needed to heal our hearts from the loss of Piper. 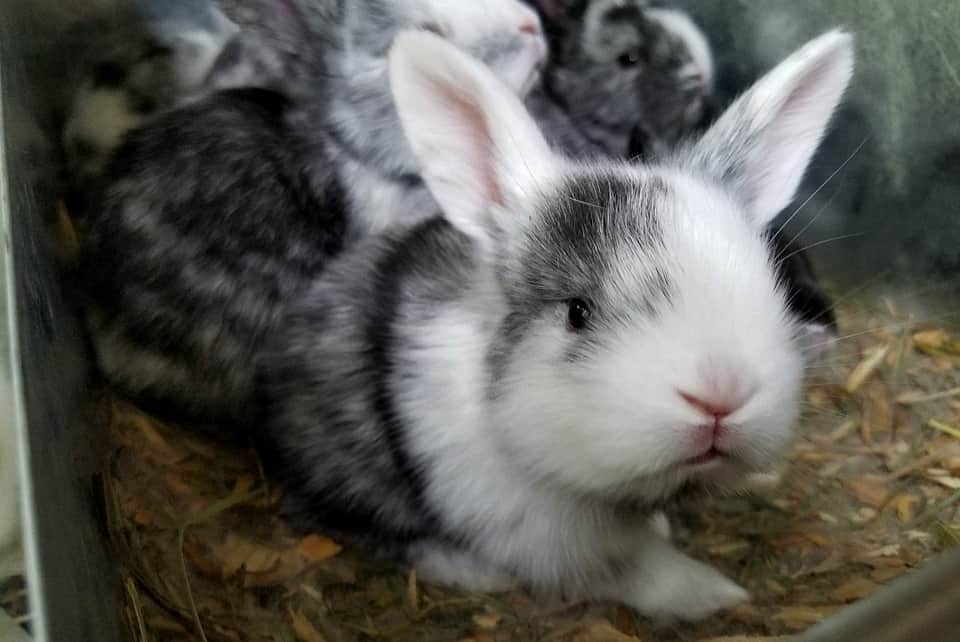 We raise Harlequin rabbits for show and meat

Then the unthinkable happens.  My Pepe, our Nigerian Dwarf goat became ill.  I immediately saw the signs and without hesitation brought in our livestock veterinarian.  My heart was not going to allow me to lose another herd member just weeks apart.  This time it was goat Polio, or so we thought.

Pepe immediately began taking Thiamine intramuscularly every 6 hours, but after 48 hours there was no improvement.  There wasn’t any further decline, he just wasn’t recovering like we thought he should be.

Two days after the first dose of Thiamine was given, at 9:30pm, we rushed him to our veterinarian’s home, praying the entire way.  Our amazing vet, with his head lamp providing the only source of light available, worked on Pepe in the back bed of my husband’s pickup truck for over 3 hours.

A catheter was placed into his neck allowing for the Thiamine to reach the brain directly through the veins; immediately we noticed slight signs that the Thiamine was working.  We went home with plans to continue the Thiamine regiment through IV, with injections every 4 hours instead of 6. 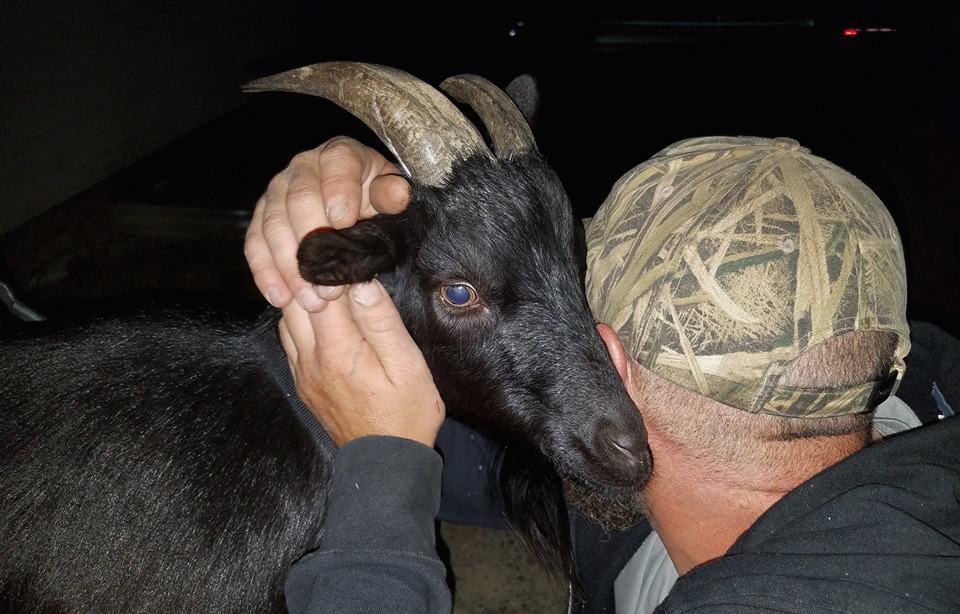 It was 2 am and I had just finished giving him an injection when it dawned on me.  His symptoms resembled Listeriosis more so than goat Polio.  The two diseases present almost identical symptoms and many goats are often misdiagnosed.   What made me realize it could be Listeriosis?  When Pepe became overwhelmed he circled, circled until he dropped.

At 7am I called the vet, quickly apologized for questioning his diagnosis, but threw out my theory that Pepe may have Listeriosis.  He was so kind and excited by this (odd I know, but that’s a veterinarian for you) that he met me at the local library and I picked up the appropriate antbiotics.  He placed Pepe on high does of Penicillin, an anti-inflammatory, a second antibiotic to be given once the Penicillin was done, and Pepe was to continue with the Thiamine. 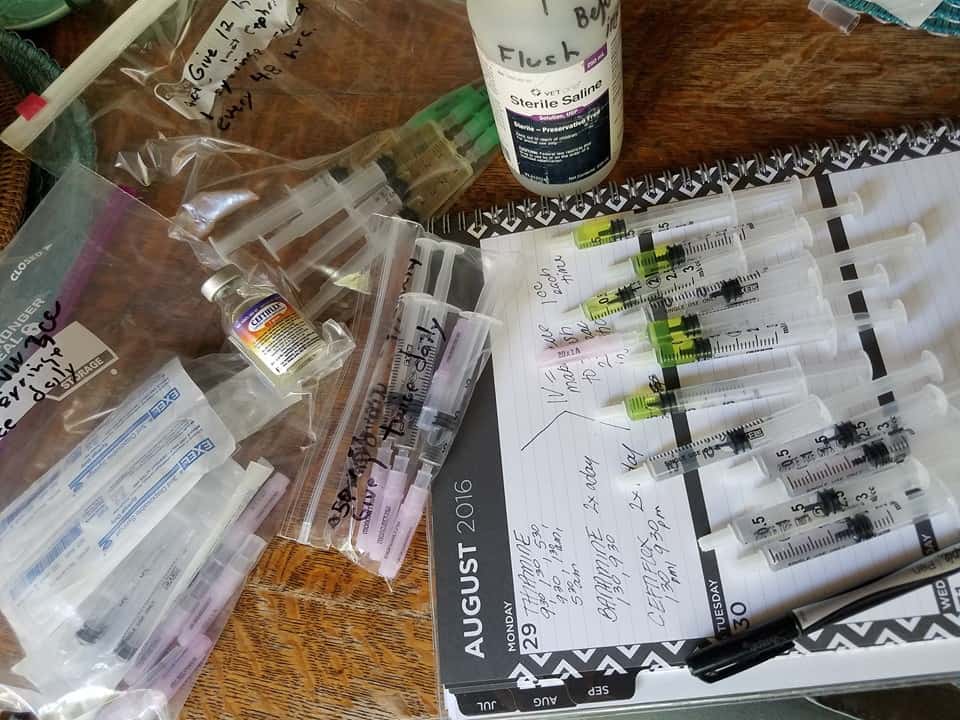 By the second day of administering the plethora of drug I was seeing no real improvement, causing my heart to sink even further.  Now, it wasn’t getting any worse, but he still wasn’t eating or drinking.  The Listeriosis had caused his legs to become stiff, he lost all use of his tongue (which was slightly hanging from his mouth) and he couldn’t open his mouth.

Even with his new medicine the symptoms continued to be an issue.  I was at a loss.  I began to panic.  I cried like I had never cried before.  Really, now what?  I knew recovery was going to take time, but I also knew he couldn’t go without water for a long period of time, and I couldn’t drench him fast enough.

As a last resort I reached for my essential oils.  Mind you I am not a vet, but honestly I had nothing more to lose.  I use them with confidence with the family, dogs, around our household and for the poultry, but I had never tried them on the goats.  I selected 3 oils known to have antibacterial, antiviral, anti-inflammatory, antiseptic qualities, one is know as a natural antibiotic, another is said to be able to influence the nervous system.  Fractioned coconut oil was mixed with the oils and then applied to the bottom of his brain stem, up to his head, on the base of his horns, behind his ears and on his spine.  I then gently massaged in the oils and left him to rest for a bit. 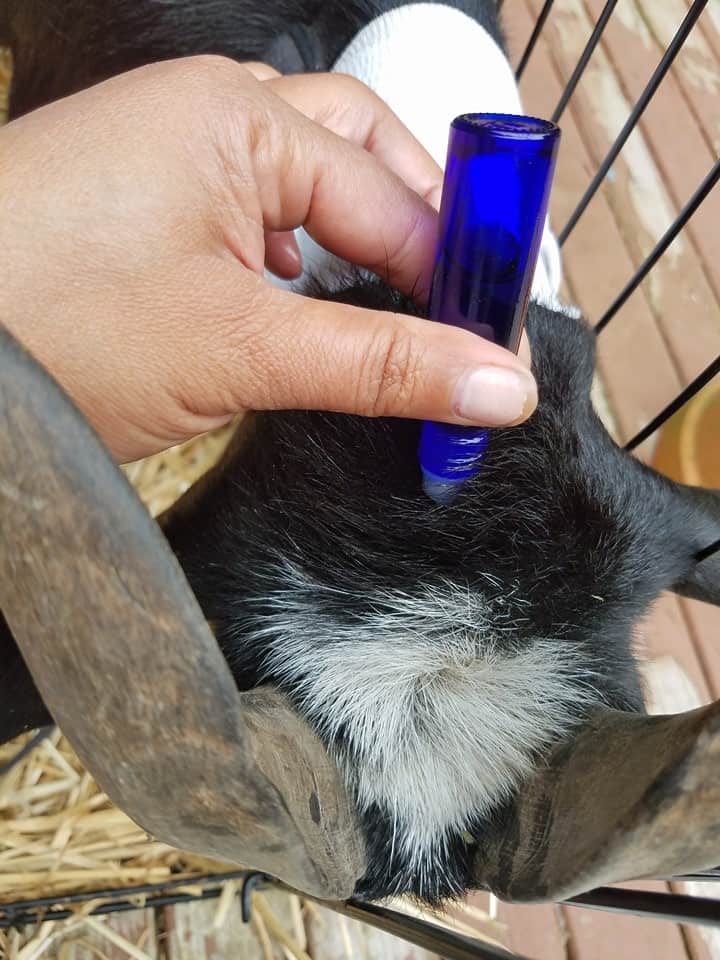 When eastern medicine is slow to work, I reached for a holistic option of essential oils.

About an hour later he came out of his kennel and began eating grass pellets and drank quite a bit of water.  Just like that.  Like it was something that he had been doing from the beginning.  I cried, I thank God, I may have even dropped to my knees.  How…what caused this…did it matter, he was moving, eating and drinking!

He wasn’t healed, we have a long way to go in order to reach that point.  I believe I exhaled for the first time in 5 days and issued prayer for giving my little guy another chance.

I don’t know what to tell you.  Was it the oils? I truly think the oils helped and we plan to continue using them until he has fully recovered.

Through the struggles of trying to heal Pepe I had lost track of what day  of the month it was…until I heard sweet chirping in the coop.  Both of our broody hen had done a fabulous job and their eggs were busy hatching! 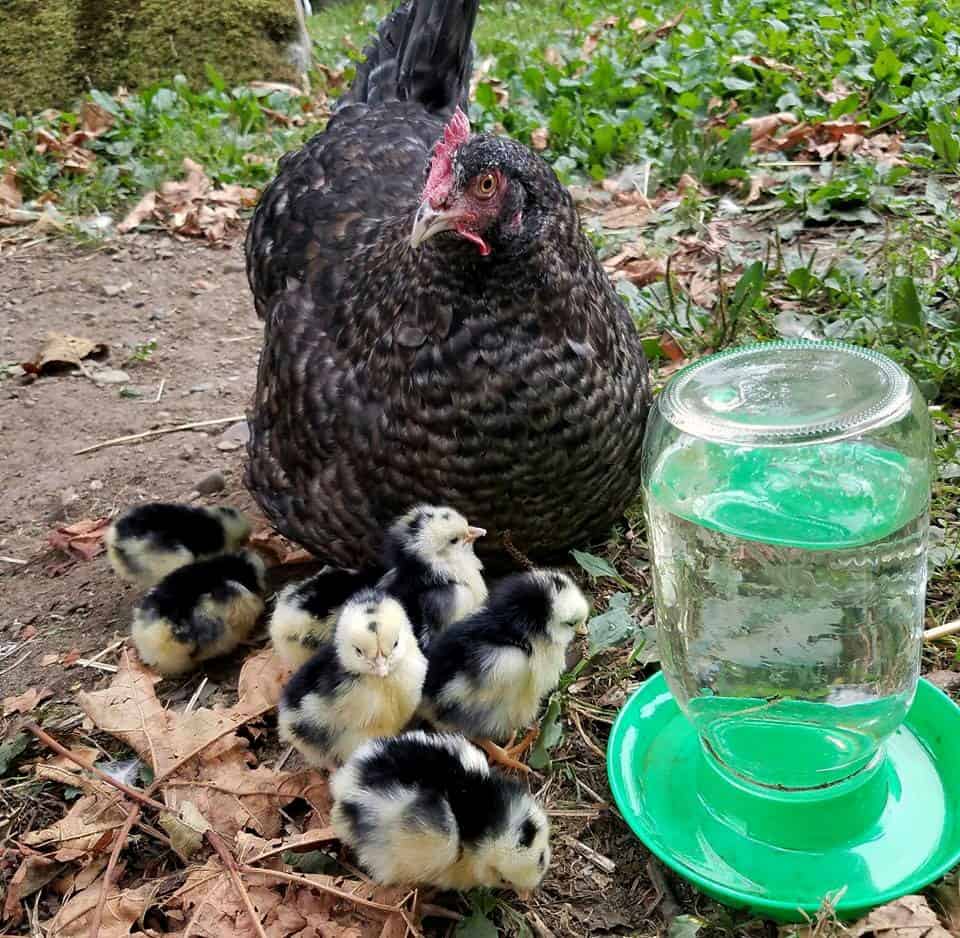 Homesteading with livestock serves a purpose for us, and while they are in our care we shall provide the best for them.  This goes for our working goats, laying hens, meat birds & rabbits, as well as our indoor pets.  The best care, as long as we live this life, nothing short of it.

Pepe is on his second round of antibiotics and is continuing with the essential oils regiment I have him on.  The healing process for Listeriosis can take months and multiple rounds of antibiotics before they are stable enough to return to their herd.  With much prayer, help, and love I truly think he will get there!

*If you are interested in learning more about the essential oils we use around our homestead, feel free to reach me here. 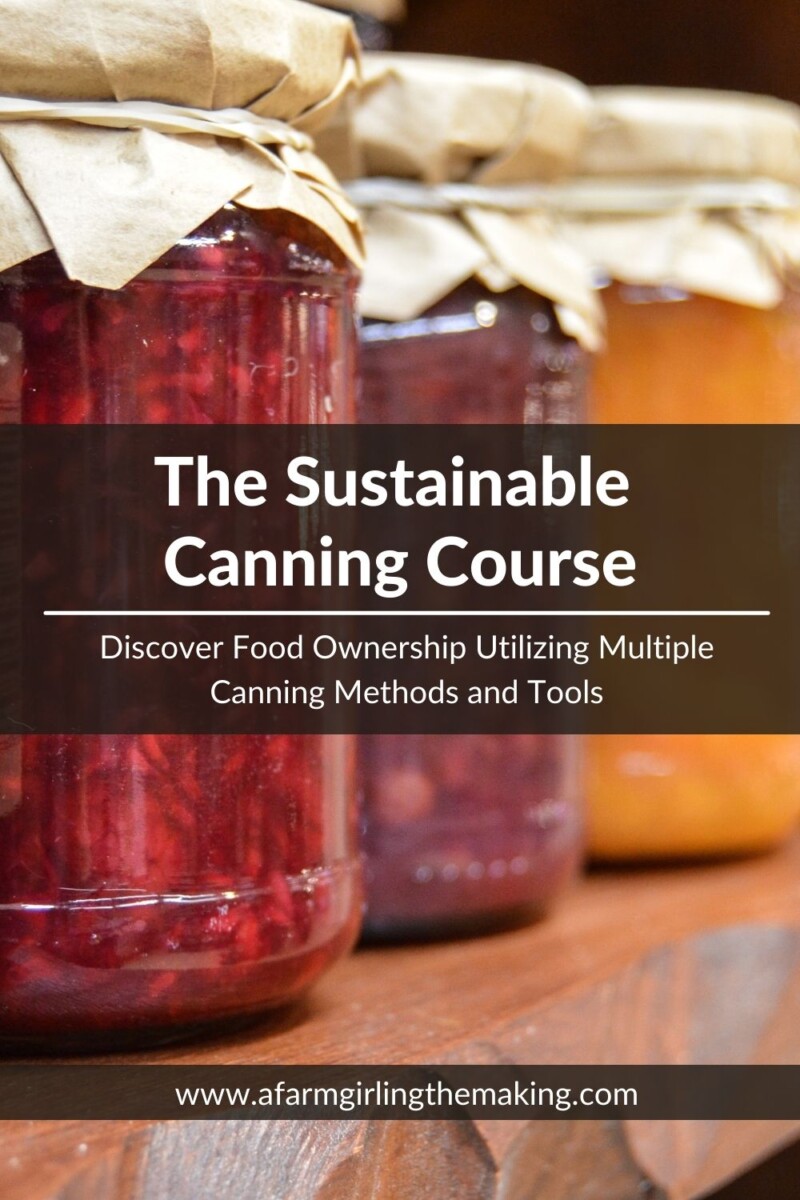 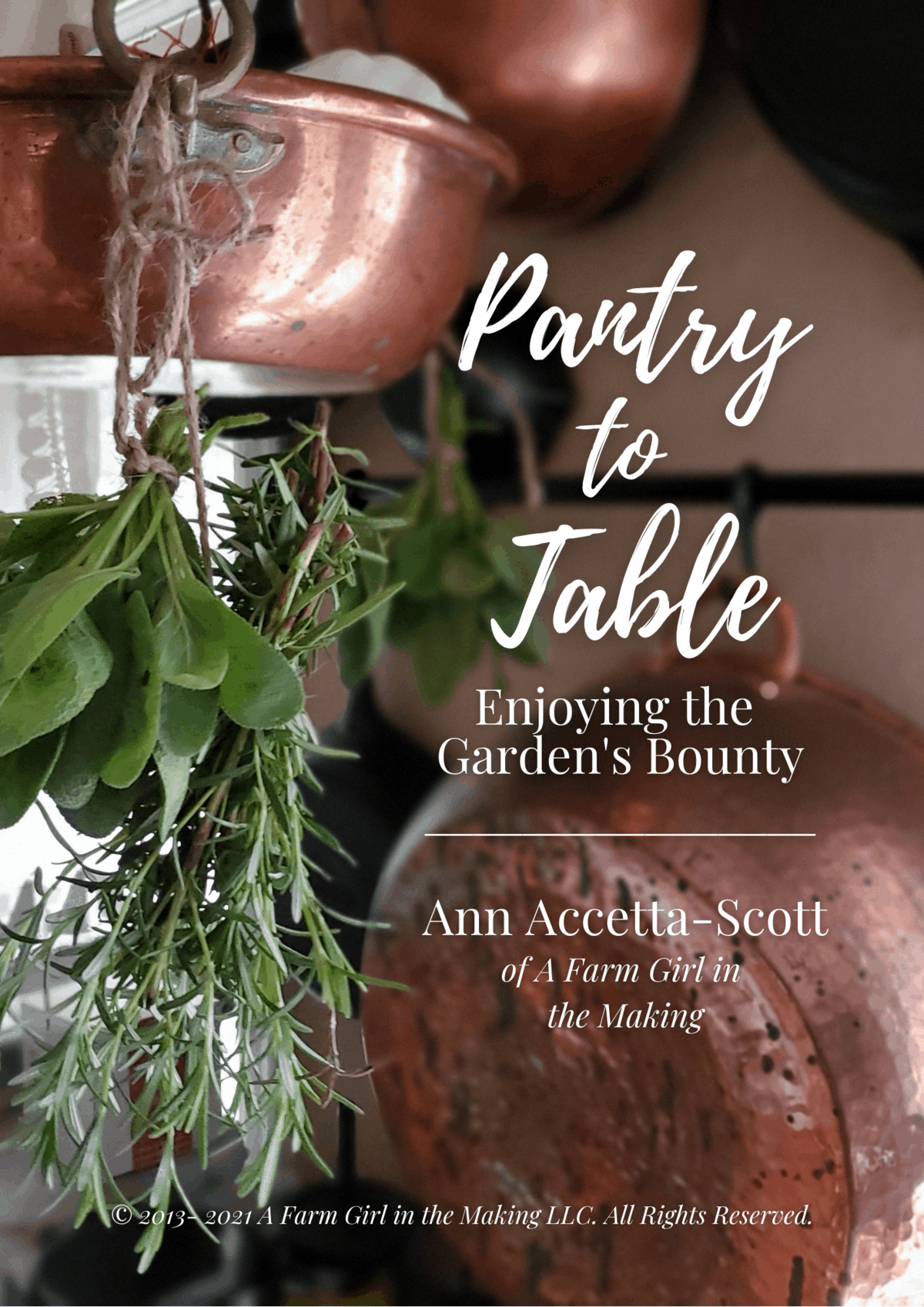